Skip to content
In September 2011 we held our first” Fun Day”, at Thornhill Community Centre in Falkirk.
This was a new venture for us. It was organised to try to encourage pet owners to take an interest in both the Club and the breed. It was open not only to Poms but to all Toy breeds.
There was a good attendance and everyone seemed to have FUN, especially in the fancy dress class.
The judge for the fun classes was John Ritchie of Dykebar Border Collies/Hollibell Hungarian Pulis. John is a great Pom fan!! As his Sat Nav failed to find the venue, he was late in arriving and Eve Smail stepped in to judge the Veterans,. then John took over. 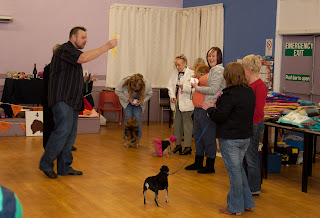 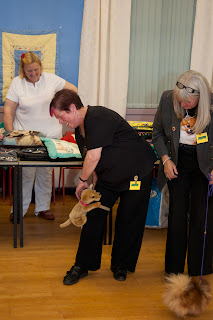 Inez Johnstone did face-painting(including turning the Secretary into a clown), Jack Chalmers (Jean’s other half) took pet portraits, Brenda and Lorna Brown manned the public address system and Lorna was also busy with her camera.

There was a super raffle.
One of the highlights of the day was “Splat the Judge”.  Championship Show judges, Eve Smail and Astrid Ogilvie had volunteered to be pelted with wet sponges. People were queuing up for the opportunity to soak these two ladies! Fortunately for them they were wearing blow-up Sumo suits which afforded them some protection- much needed when judge John decided to throw the whole bucket of water at them!!(Will not repeat what Astrid called him!) The Sumo suits also increased the entertainment value. 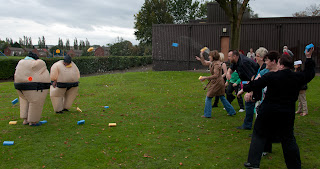 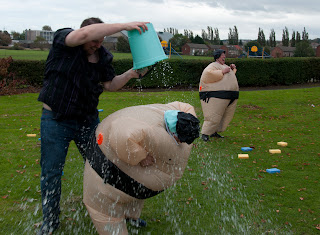 Most of those present asked when we would be having our next “Fun Day”, an encouraging sign.